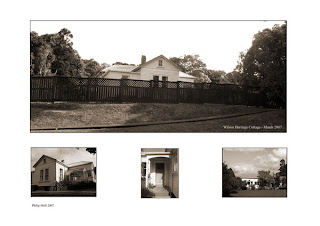 Wednesday the 18th of August 2010 was the official opening of the carefully renovated Wilson Cottage by the Wilson Home Trust on the Wilson Centre, cliff-top site at Takapuna.

This cottage was rescued from demolition to make way for the construcion of the new building during 2007-2008.

The historic cottage was moved from the corner of Lake Road and St. Leonard's Road (as shown in this picture) to its present location nearer the main buildings and within view of the chapel which was recently awarded an 'Enduring Architecture Award'.

The cottage will be used by the Wilson Trust as office accommodation and as a wedding reception venue.