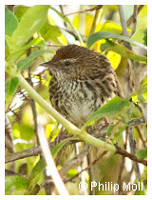 Tiritiri Matangi Island is always a delightful place to visit but with interesting company  it becomes even more rewarding. We set out to look for penguins at Hobbs beach at dusk and watched the sunset above white capped waves. We found one' little blue' tucked up warm and dry in a cosy spot near the wharf.

Another night time excursion looking for tuatara was only slightly disappointing as we were rewarded by a full moon sparkling over the ocean. It was too cool for tuatara we think.  Later we heard kiwi calling.

I had set out to see a spotless crake but they were as elusive as ever but on route to the far end of the island I heard an unusual bird call. A friend on a previous visit had trained me to take notice of these so I waited patiently for some time before the call Talip Talip was rewarded by the sighting of a fernbird and this photograph too.