Wind Burn on the East Coast

Hot and very windy. Back on the East coast. ...... I'm wind burnt today watching a FT chick being fed by its mother . After dinner by the shelter of the river we head back to the beach to check things out..


Then enjoyed watching the sun go down and the orange glow on the beach over the sculptured rippled sands from the persistent Easterly sea breeze.

'Leave nothing but footprints'

'Take nothing but photos'. Kayaking to the island was on the agenda to check traps and storm damage. Conditions were perfect after recent storms that had ripped sand dunes and shore line away eating away the coastline. Sand is no match however stabilised against high winds and strong waves. 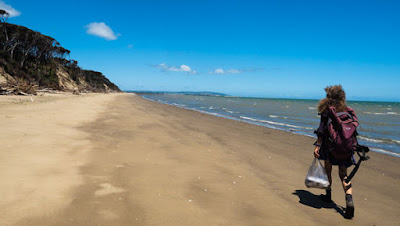 This turned into one of those really memorable days that I will tuck into my collection. The huge numbers of birds. South Island pied oystercatcher, Caspian tern, turnstones, Knots and bar-tailed godwit. As the tide came in the birds were up and flying looking for alternative places to roost after feeding on the shallows. It was an amazing sight, the remoteness adding to the wonder of it all.
Posted by Philip at 10:14 PM

I could feel the intense heat of the sun burning my knees as we sat watching a pair of Fairy Tern tend their only chick. They had hidden it near a pingao plant below a small sand dune out of the strengthening North Easterly that was preventing us using the sun umbrella.

The male bird would hunt for fish then return and pass the fish to his mate who would then feed the five day old chick.

I was back with my Monday friend catching up on news and it was great to be back. 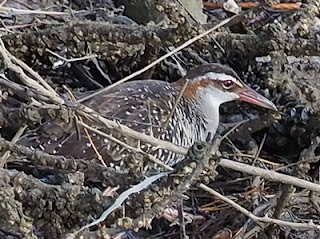 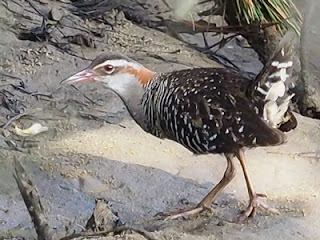 Later we shared a meal and a glass or two of wine on the deck of her cottage next to the stream while a swamp harrier patrolled the dunes nearby. Then I spotted the elusive resident banded rail furtively walking along muddy edge of the stream as it was still low tide.
Posted by Philip at 9:21 AM

Each day the tides have been higher this week and this morning the King Tide completely covered the Shoal Bay Chenier shell bank. Any nests remaining would have been washed away. Yesterday the remaining pied stilt nest had two of its three eggs washed away.

This morning the  godwit circled around looking for somewhere to land to sit out the high tide at 10.47 am but the whole of their usual roosting site was covered. Eventually a lead bird landed in the water and with others was able to stand (wade) in the shallow water. But this area is the territory of the regular Variable oystercatcher pair so it had to reclaim this site by driving away the godwit. I'm not sure where they eventually ended up resting to wait for low tide to be able to feed.

Beware the Tides of January.

Unfortunately high, 3.6 metre tides are due all week. Today we lost another pied stilt nest this time with four eggs. The tide height was 3.4metres.
Another nest just 7 metres away survived but with higher tides this week and gale force winds predicted  this could be a problem for the remaining nest of three eggs.
Posted by Philip at 7:20 PM

HAPPY NEW YEAR To All

Well what adventures will 2018 bring. I'm already looking forward to catching up with MINT's friends at Ruapehu soon.

In the  meanwhile local projects will be begin another year with some great volunteers and also catching -up with my 'Monday friend' for some more fun on the East & West coasts too.
Posted by Philip at 6:26 PM
Newer Posts Older Posts Home
Subscribe to: Posts (Atom)