Headed down the Miranda coast. Thousands of bar-tailed godwits and knots ready for their migration North. Some may already have left heading for China first and then to Alaska to breed.

Good numbers of wrybill have arrived from the South Island and have settled in the arid dry stilt ponds at high tide. A small group were feeding along  the Kauai coast. including this metal banded bird.. 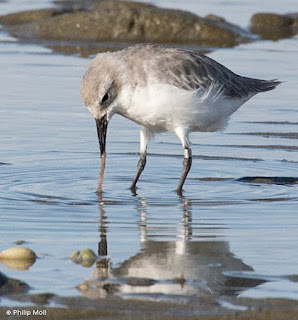 Then via Thames and driving North  up the Thames coastline to Coromandel town. Stayed at the little campsite on an estuary nearby. Then on to Colville passing some historic little settlements.

We are soon on gravel roads with Mt Moehau ahead. We turn inland and cross a small hill range via a windy gravel road and soon drive past a vast wetland before the DOC campsite at Waikawau bay. 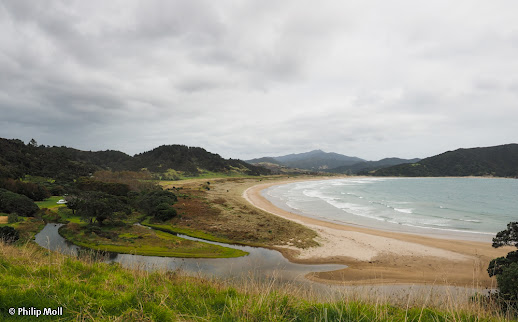 This is a beautiful location to stop for some days to explore. The beach is stunning and is 3.5kms long. It has a backdrop of some huge sand dunes.  The beach has to walked each day to reach a high tide roost site at the Northern river end. This roost attracts  white fronted terns, NZ dotterel, banded dotterel, & Caspian tern.  Five pairs of variable oyster catcher are spaced out along the 3.5 km beach but only one pair have a single juvenile bird with them and they are at the Northern end.

We hear the call of kiwi early evening shortly after dusk and a morepork throughout each night in the distance. With no wi-fi signal this is heaven. Such a peaceful place.