With a string of lovely sunny warm days summer seems early and the pohutukawa trees are already in flower along the coastline as if bringing forward  the Christmas season. 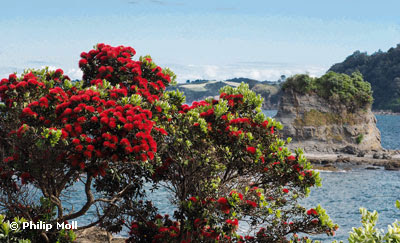 I'm back on the East coast North of Auckland enjoying the wide open beach- scape's and wildlife. Today watching Caspian and Fairy  Tern catch and deliver fish to their chosen mates. 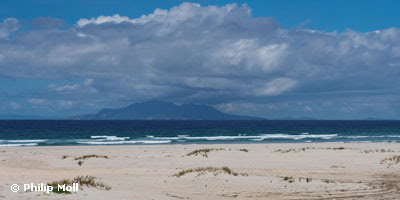 Viewpoints are important for watching birds and birds can pick difficult places for us to observe and record. The fairy tern had chosen a site just beyond a sand dune topped with pingao grass. An adjustment of our lookout  site had been essential.
Posted by Philip at 9:22 PM

It was damp morning but good to meet up early with Jim this morning to count the birds at three high tide roost sites. Two in  Shoal and one in Ngataringa estuary.

There was a good number of godwits and a scattering of other species including resident NNZ dotterel and Variable oystercatchers.

When a mature pohutukawa tree gets in your way on the  Devonport peninsular this is what you do - you Chop it Down.  It’s the tree in the middle of the attached photo.  To make way for an extension and a swimming pool. How crazy on Cheltenham beach.  It lost it's previous protection with the RMA changes.


The planners report stated that the ‘The removal of the pohutukawa will be mitigated by other planting’.
This was reported in the Flagstaff and challenged by the Devonport Heritage people Nov 3rd.  The tree was chopped down on the 15th Nov ( yesterday) .


A letter in the Flagstaff today by a Robert Weber suggests that the ‘Council needs to have a serious rethink about the values it has and the duty to protect in the interests of all of us’  He states that by law the council has to weigh the benefits of development against the effect on natural resources.

It must be nearly Summer. I'm back at Paradiso and the day is just perfect. The ocean looks magic, the islands mysterious. It's great to catch up with my 'Monday friend' and share news and amusing stories. 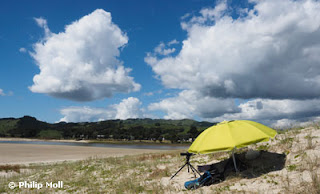 Then its down to the serious business  of watching the birds - Fairy Tern, dotterels, Caspian Tern,  spoonbills and many Variable oystercatchers. There are dotterel and VOC chicks running around everywhere and the FT's have two eggs.

With a 3.5 Metre high tide this morning at 10.29 I had to check the roost sites of Ngataringa and Shoal bay. It was a fine day with a Northerly breeze.

I counted 174 godwit on two close together shell banks in Shoal bay near where we had watched a lone godwit fly in to feed on Saturdays walk.﻿﻿﻿
﻿
Other birds seen in Shoal bay included 13 South Island pied oystercatcher (SIPOS) on another roost site and 4 Variable oystercatcher, two white faced herons and a pair of NZ dotterel with the godwit.
Posted by Philip at 7:56 PM

It was great to have a  group of 17 people who joined me for a Forest and Bird North Shore branch walk at Shoal bay on Saturday morning at 10.30 am.. The forecast was rain, getting  heavy around 2pm but it held off for a while as I shared my bird observations. Tides are tricky at this time of the year and I had to stall our walk to allow time for the tide to recede and birds to move off their high tide roosts to start feeding on the mud flats.

Two pairs of Variable oystercatchers were at the western end of the shell bank feeding as well as several Southern black backed gulls and two spur-winged plover.  Romeo and Juliet our regular VOC pair as usual to the East. I have watched them mate build nests and have chicks since the 2012/2013 season. Unfortunately last season was the first time they didn't manage to fledge offspring.

Our regular NZ dotterel in breeding plumage sat at the top of the shell bank ridge, a sure sign of a potential nest this season. That limited how far we could walk without fear of disturbing this 'on territory bird'. Also a sudden squall of rain and mist closed down the visibility for seeing further out across the estuary in a search for feeding birds. Right on cue a lone godwit  appeared in front of us and started feeding on the tidal edge. My trusty scope ensured that those that wanted a closer look could do so.
Someone in our group spotted a large tern diving far out and it was a Caspian tern  a bird often seen here that also nests down the motorway edge.

The rain seemed to start to set in and it was nearing 12 pm so we headed back. An enjoyable walk with a great group of interesting people.
Posted by Philip at 4:49 PM
Newer Posts Older Posts Home
Subscribe to: Posts (Atom)