Great to be invited to Bayswater School today to help with the tree planting in the school grounds.
This is to replace the sixty year old Macrocarpa trees that recently had to be removed as they were deemed unsafe.
Great enthusiasm and turnout by the students and parent helpers. 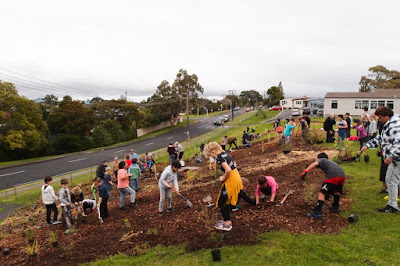 Yesterday was the annual OSNZ winter census day to record shorebirds in the Auckland region. It was good to catch up with Jim after his very recent return from Alaska and meet up on the shores of Shoal and Ngataringa estuaries to count the shorebirds.

Numbers seem consistent with previous counts with some minor variations. Pied stilt seem to be visiting in slightly larger numbers and that has been consistent with my regular monthly counts.

Shorebirds are under huge pressure these days from competition with recreational interests around our coastline. Sea level rise also affects those that attempt to nest. Our long distance migratory visitors also have issue on their migratory stopover places. Numbers generally are falling.

Defending and protecting safe areas of habitat with minimal disturbance is the key locally. Trying to get the authorities to recognise and follow their own designations is the challenge. Strange decisions are made that do not reflect care or understanding of these  habitats. 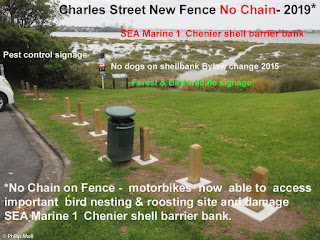 The Chenier shell barrier banks of these estuaries are listed as SEA Marine 1 sites. They are an ONF ( Outstanding Natural Feature ) on the Unitary Plan but locally a new fence that has been poorly designed has allowed motor vehicles to pass through it and gain access to one of these rare geological features.

It should be easy to get this corrected but its not. Local volunteers are now beginning to ask what is the point of these designations.
Posted by Philip at 11:27 AM
Newer Posts Older Posts Home
Subscribe to: Posts (Atom)