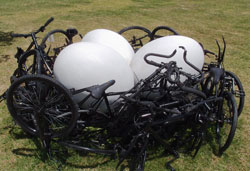 Last night I woke at 3am as I often do thinking of recent events but was pleased for the distraction of hearing a morepork calling way in the distance. It was probably in Northboro reserve near the mangroves.  I was just drifting back to sleep about half an hour later when the call, much louder this time, woke me as the bird had moved to somewhere in our front garden. It called for six times and I thought I would get up and try and see it but then it went silent and I listened carefully. It started up again but this time in  another direction and some way away. I am always hoping to see one up close one day in the garden.

Yesterday afternoon it was the last day of the Sculpture on the Shore show. Full of interesting art work and held at Takapuna fort reserve its a great show to raise money for Womens Refuge. This particular work by John Ferguson entitled 'The Future Laid in the Past' caught my eye and I wondered if the morepork would approve of such a nest.
Posted by Philip at 8:56 AM
Newer Post Older Post Home